Harsha or Harsha Vardhana orHarshvardhan (Hindi: हर्षवर्धन) (c. 590—647) was an Indianemperor who ruled northern India from 606 to 647 AD. He was the son of Prabhakara Vardhana and younger brother of Rajya Vardhana, a king of Thanesar, Haryana. At the height of his power his kingdom spanned thePunjab, Rajasthan, Gujarat, Bengal, Orissa and the entireIndo-Gangetic plain north of the Narmada River.

After the downfall of the Gupta Empire in the middle of the sixth century CE, North India reverted to small republics and small monarchical states. Harsha, a Buddhist convert, united the small republics from Punjab to central India, and they, at an assembly, crowned Harsha king in April 606 AD when he was merely 16 years old.

They were descended from a certain Pushyabhuti who founded and ruled the kingdom of Sthanvisvara or modern Thanesar, an ancient Hindu pilgrimage centre and one of the 51 Shaktipeeth's, now a small town in the vicinity of the newly created Kurukshetra in the state of Haryana north of Delhi. The name Pushpabhuti is the key to Harsha's origins and the relevant reference point is an inscription dated 181 AD and found at Gunda in the state of Gujarat. That inscription mentions a general of Rudrasimha I or Rudrasingh by the name Rudrabhuti. Rudradaman I, an ancestor of Rudrasimha I had conquered the Yaudheya, who were the original masters of Haryana.

Xuanzang, the famous Chinese Buddhist monk, scholar, traveler, and translator who described the interaction between China and India in the early Tang period, stated that Harsha was of Vaishya caste.

After the downfall of the Gupta Empire in the middle of the sixth century CE, North India was split into several independent kingdoms. The Hunas had established their supremacy over the Punjab. The northern and western regions of India passed into the hands of a dozen or more feudatory states.

Prabhakara Vardhana, the ruler of Sthanvisvara, who belonged to the Pushyabhuti family, extended his control over neighboring states. Prabhakar Vardhan was the first king of the Vardhana dynasty with his capital at Thaneswar.

This period of kings from the same line has been referred to as the Vardhana dynasty in many publications,

Rajya Vardhana’s and Harsha’s sister Rajyasri had been married to the Maukhari king, Grahavarman. This king, some years later, had been defeated and killed by king Devagupta of Malwa and after his death Rajyasri had been cast into prison by the victor. Harsha's brother, Rajya Vardhana, then the king at Thanesar, could not stand this affront on his family, marched against Devagupta and defeated him. But it so happened at this moment that Shashanka, king of Gauda in Eastern Bengal, entered Magadha as a friend of Rajyavardhana, but in secret alliance with the Malwa king. Accordingly, Sasanka treacherously murdered Rajyavardhana.

On hearing about the murder of his brother, Harsha resolved at once to march against the treacherous king of Gauda and killed Deva Gupta in a battle. Harsha ascended the throne at the age of 16.

Though quite a young man when he came to power, Harsha proved himself a great conqueror and an able administrator. After his accession, Harsha united the two kingdoms of Thanesar and Kannauj and transferred his capital from Thanesar to Kannauj.

Harsha set out to punish his rival, Shashanka, the lord of Gauda (Bengal). He formed an alliance with Bhaskaravarman, king of Kamarupa and marched on Shashanka. Although he defeated his rival, the result was indecisive as Shashanka continued to rule much of his kingdom and it was only after his death that Harsha was able to oust Shashanka's son, Manava and bring Bihar, Kanauj and northern Bengal under his rule (Bhaskaravarman was able to conquer the remainder of the Shashanka's kingdom). He conquered Dhruvasena of Gujarat and gave his own daughter in marriage to him. He also conquered Ganjam (whose king was a vassal of Shashanka), a part of the modern Orissa State.

Harsha was an energetic ruler who travelled frequently in order to keep himself accessible to his subjects. In the latter half of his reign, he spent most of his time in camp, travelling from place to place. He was a man of considerable literary interests and talents and despite his administrative duties, he managed to write plays i.e. Ratnavali, Priyadarshika and Nagananda, of which, the first two are comedies in the classical style and the third has a serious religious theme. He maintained a magnificent court where philosophers, poets, dramatists and painters flourished. Bana, the author of Harsha-Charita and Kadambari, was the court poet of Harsha. Maurya, the author of Mayurashataka, and Bhartrihari, the author of Vakyapadiya and a grammarian, also lived at the court of Harsha. Harsha was the chief patron of the University of Nalanda where about 10,000 students from all parts of India and abroad studied.

Patron of Buddhism and literature

Harsha's father, Prabhākara was, apparently a sun-worshipper and of Bargujar clan, his brother followed Hinayana Buddhism while, according to Bana, Harsha himself was a Mahayana Buddhist. Harsha was a tolerant ruler and supported all Indic (or Hindu) faiths – Buddhism, Vedism and Jainism. Early in his life, he seems to have been a follower of Sun Worship, becoming a patron of Shaivism and Buddhism later on.

His sister Rajyashri's conversion to Buddhism presumably had a positive effect on his support to the religion. His approach to religion is evident in his celebrated play Nagananda. The play's theme is based on the Jataka tale of the BodhisattvaJimutavahana, but Harsha introduces the Goddess Gauri, Shiva's consort, as the saviour of Jimutavahana, a feature not found in the Jataka. The great Indian mathematician Brahmagupta also lived in the Empire of Harshavardhana.

According to the Chinese Pilgrim Xuanzang, who visited his kingdom in 636 CE, Harsha built numerous stupas in the name of Buddha. Xuanzang entered a grand competition organized by Harsha and won the theological debate. Harsha also became a patron of art and literature. He made numerous endowments to the University at Nalanda. Two seals of Harsha have been found in Nalanda in the course of the excavations. All these favours and donations of the great emperor were crowned by the construction of a lofty wall enclosing all the buildings of the university to defend the institution from any other possible attack. In 643 he held a Buddhist convocation at Kannauj which was reputedly attended by 20 kings and thousands of pilgrims.

In 641, following Xuanzang's visit, Harsha sent a mission to China which established the first diplomatic relations between China and India. The Chinese responded by sending an embassy consisting of Li Yibiao and Wang Xuanze, who probably traveled through Tibet and whose journey is commemorated in inscriptions at Rajagriha – modern Rajgir, and Bodhgaya.

Harsha was a noted author on his own merit. He wrote three Sanskrit plays –Nagananda, Ratnavali and Priyadarsika. His reign is comparatively well documented, thanks to his court poet Bana and Xuanzang. Bana composed an account of Harsha's rise to power in Harsha Charitha, the first historical poetic work in Sanskrit language. Xuanzang wrote a full description of his travels in India.

Harsha's participation in the cultured life of his court was more direct than that of most kings, and it is in his personal contribution to Sanskrit literature that he clearly overshadows them. To him are assigned three plays: Priyadarsika, Ratnavali, and the Nagananda. In addition, he is credited with two significant poems on Buddhist themes - the Ashtamahasricaityastotra (Praise to Eight Grand Caityas [Buddhist assembly halls]) and Suprabhatastotra (Laud to Morning) - and a tract on grammatical gender, the Linganusasanam. Harsha's authorship has been disputed on several occasions, but no decisive contrary arguments have been proposed.

The Priyadarsika appears to be the earliest of Harsha's plays. It and the Ratnavali deal with the amorous adventures of the king Vatsa, his queen Vasavadatta, and newcomers to the royal harem. Both plays borrow from the earlier works of Bhasa and Kalidasa (especially the latter's Malavikagnimitra) and are based ultimately on material in the collection Brhatkatha. These plays lack thematic novelty but sustain interest through brisk dialogue. Both are frequently cited by later writers on dramatic theory and technique.

Harsha's Nagananda is his most important play. It is, in fact, a singular creation in Sanskrit drama. This five-act drama draws again on the Brhatkatha for the substance of its first three acts. In them, the hero, Jimutavahana, Prince of the Vidyadharas, meets and marries the Siddha princess Malayavati. To that point, the romance of the fairy prince and princess is quite conventional.

The mood of the play changes sharply in the fourth act. Jimutavahana discovers mounds of skeletons which evidence the daily sacrifice of serpents to the celestial bird Garuda. The hero resolves to offer his own body so that the serpents may be spared (a type of resolution very familiar in Buddhist literature). At the drama's conclusion it is the non-Buddhist goddess Gauri, however, who restores the bodhisattva, Jimutavahana, to life. In this attractive and moving drama, Harsha combined Buddhist and "Hindu" themes adroitly and uniquely, and through it one sees clearly his artistic and political genius.

Harsha died in the year 647 AD. He ruled for 41 years. After Harsha's death, apparently without any heirs, his empire died with him. The kingdom disintegrated rapidly into small states. The succeeding period is very obscure and badly documented, but it marks the culmination of a process that had begun with the invasion of the Huns in the last years of the Gupta Empire.

Neither Bana's nor Xuanzang's account gives any details of this period. A few tantalising glimpses are offered in some ancient Chinese and Tibetan Books. The one in the Tibetan book The White Annals tells that Harsha had sent an envoy to the Chinese Emperor, who in turn sent a Chinese one(named in the Chinese sources as Wang Xuance) with a convoy of thirty horsemen. When they reached India they found that Harsha was dead and his minister Arjuna had usurped the throne. Arjuna is said to have been persecuting the Buddhists and attacked the envoy who had to flee to Tibet. The Tibetan king decided to avenge the insult to the Chinese emperor and sent the envoy back with an army that finally managed to defeat and take Arjuna and his family as prisoners, and sent them back as prisoners to the Chinese emperor. Historians have not yet managed to unravel what the facts were from these meagre accounts. Harsha had two sons named Vagyavardhan and Kalyanvardhan. They were killed by Arunashwa, a chief minister in harsha's court. Harshavardhan's wife was durgavati was taken prisoner. 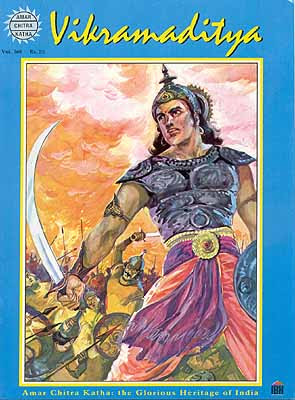