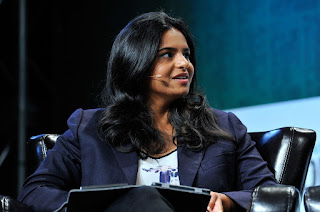 Ruchi Sanghvi (born January 20, 1982) is an Indian computer engineer. She was the first female engineer hired by the social-networking website FACEBOOK

Sanghvi was Facebook's principal product manager, where she oversaw Facebook Platform and News Feed. She was responsible for the company’s Platform product strategy and new product initiatives. Sanghvi was an early engineer at Facebook and one of the primary developers for News Feed. Prior to Facebook, she was a software engineer in the Real Time Communication Group at Oracle. Sanghvi holds a bachelor’s and master’s degree in electrical computer engineering from Carnegie Mellon University.

In late 2010, she quit Facebook and in 2011, she started her own company Cove, with two other co-founders. The company was sold to Dropbox in 2012 and Sanghvi joined Dropbox as VP of Operations. She left Dropbox in October 2013.

Sanghvi was raised in Pune, India. When she was young, she intended to join her father's business after completing her studies. Sanghvi pursued her Bachelor's and Master's degrees in electrical computer engineering from Carnegie Mellon University.

After graduating Carnegie Mellon University in 2004, Sanghvi initially planned to work in New York City, but says that she was frightened by the small cubicle size. She decided instead to move to Silicon Valley where her former CMU colleague Aditya Agarwal, whom she was dating, worked. She got a job at the Oracle Corporation.

In 2005, Sanghvi and Agarwal both started working at Facebook. Sanghvi was Facebook's first female engineer.

Sanghvi was one of the main people working on the first version of Facebook's news feed product, first launched in September 2006, and she wrote the blog post announcing its launch. The original news feed was an algorithmically generated and constantly refreshing summary of updates about the activities of one's friends. The concept was relatively new at the time, with Twitter having launched only a few months in advance.

The News Feed feature was greeted with a lot of pushback and criticism, including some that was directed personally at Sanghvi. The criticism was dealt with through the introduction of new privacy controls in terms of what personal data would appear in friends' news feeds. These privacy controls were coded in a hectic 48-hour coding session by Sanghvi and other Facebook engineers including Chris Cox and Adam Bosworth, and announced in a contrite blog post by Facebook's principal founder Mark Zuckerberg.

In 2006, Sanghvi became the product lead for Facebook Platform.

In late 2010, Sanghvi left Facebook and in 2011, co-founded a stealth collaboration startup called Cove along with Aditya Agarwal. In February 2012, Dropbox, the file synchronization and backup service company, announced that it had acquired Cove and that Sanghvi and Agarwal would be joining Dropbox. Sanghvi later became the Vice President of Operations at Dropbox, managing product, marketing, communications and other functions. In October 2013, Sanghvi left Dropbox, but continued to retain an advisory role at the company.

Sanghvi is an investor and adviser in a number of Silicon Valley companies including privacy-oriented photo-sharing service Path, workplace collaboration application Asana, and backup and storage service Dropbox (where she used to work).

Sanghvi was listed as one of the founders of FWD.us, a 501(c)(4) lobbying group formed in Silicon Valley to promote immigration reform, improve education, and facilitate technological breakthroughs in the United States. The group launched on April 11, 2013.

In an interview with Mint in November 2013, Sanghvi described her involvement with FWD.us as follows: "Silicon Valley is a very idealistic society. So FWD.us is a mission to step down from the idealistic world and do some real work. The mission is to boost the knowledge economy. Immigration is only one part of it, the other part of it is to figure out bipartisan policies to help include STEM (Science, Technology, Engineering and Mathematics) studies in the education system. Immigration is a really hot topic and I am very satisfied with the senate Bill. I am hopeful that immigration reform will pass, even though right now Washington is divided."

Sanghvi is married to Aditya Agarwal, who was her colleague at Carnegie Mellon University and later at Facebook, Cove, and Dropbox.

Sanghvi was awarded a TechFellow "Best Engineering Leadership Award" in 2011 for her work at Facebook.
Posted by प्रवीण गुप्ता - PRAVEEN GUPTA at 3:38 AM